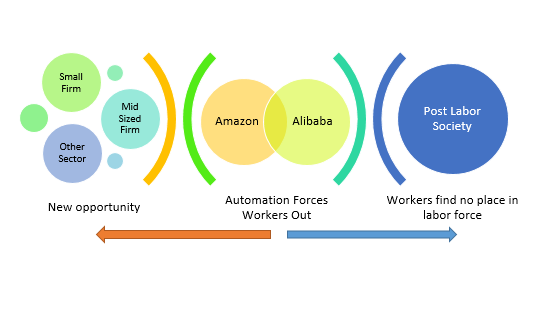 I wanted to follow up a previous post I did about what the future of the labor market might look like. Maybe this will turn into a series, but for now I just came across an interesting post about robots.  Anyways, I saw a neat video of the sorting robots working in Alibaba’s warehouses:

Contrast this scene with what we know of the working conditions for Amazon’s warehouse workers. Comparatively, is this work worse than 19th century factory work? Does it matter if the work is materially better or worse than the past? Who benefits from automation, and is there an alternative for workers displaced from that automation? Let’s examine that.

The political right would argue that the quality of work is irrelevant, in that there is a market rate for the laborers who wish to work in these jobs, and that they have a choice as to whether to work there or not. They argue that the quality of work is not a moral consideration. The free market will join laborers to employers based on their common utility; that is, what a laborer can produce and the employer will pay. If workers are unsatisfied with the conditions of their unemployment they are free to seek other unemployment.

The political left would argue that, left to their own devices, employers and owners of capital would extract labor from people in unsafe and deplorable conditions in order to maximize productivity. Further, they charge that employers will collude to depress wages by organizing trade associations, and lobby for beneficial laws to protect owner interests. They argue that there should be moral considerations for the working conditions of laborers.

At the risk of sounding like a centrist, there are truthful elements to both paradigms, but undoubtedly automation of this sort tends to benefit capital interests and harm laborers (though it does benefit consumers, but that tale is for another day). Sure, Amazon warehouse employees could leave and find another job, but where should they look, and would they receive the same slight wage premium? Likely not, and the displacement of workers will only make the nature and wages of employment more disadvantageous for laborers due to two main trends:

What happened to the Alibaba warehouse employees after the robot automation? Were they able to find a similar job at a small or mid-size company that did not have the scale to implement automation? Did they receive a similar pay? Finally, will the same set of cause and effect scenarios play out in the U.S.? The graphic below illustrates a possible framework to answer these questions by showing the potential path of movement for displaced workers, albeit in a simplistic way:

If displaced workers seek similar jobs which suits their training and skills, they will likely have to search for jobs in companies which have not yet scaled enough to implement automation. These jobs will likely pay less and will be less secure as those firms grow and themselves pursue automation. Also, because there will be more displaced workers seeking the same jobs in the same line of work, the labor pool for those jobs will grow and wages will go down. Workers could of course transition to another job sector by attempting to apply their skills to something else, but here again we expect there to be a wage decrease.

For workers who aren’t able to re-purpose their warehouse or factory skills for another type of career, they may leave the market altogether, to join a growing group of people which comprise the post-labor society. We have seen the makings of this even in the past few years as evidenced by the labor force participation rate:

Economists have struggled with the causes of LFPR decline, naming increased education instead of work, earlier retirement and, as I’ve mentioned, automation. The case for earlier retirement is a paradoxical explanation to me, given that may western governments are seeking to raise the retirement age for pensioners (see: Russia).What is less clear is whether there is a lower bound which is vital to support growth. Even the most hawkish supply side economist must concede that without a robust domestic demand market, those robots will be producing products which no one can afford to buy.

These next decades are going to be interesting in this respect because of their potential to fundamentally transform the employer/laborer relationship as well as the laborer class as a whole. Some left-leaners argue that we shouldn’t even be trying to save factory and warehouse jobs because they are terrible jobs which aren’t suited to the human mind or body and are better performed by robots. What will humans do instead then? What policy makers should be looking at are ways to steward this new economy in ways that allow for increased automation and productivity without the massive suffering of displaced workers. Woof, that is quite a task.