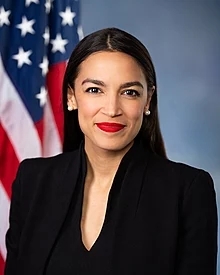 I don’t have the energy to look into how early on a generation produces a congressional representative, but the Millennials seem to have arrived. I know that I’m not the only one surrpised by the immediate space carved out by Alexandria Ocasio-Cortez(AOC). Millennials(left leaning at least) have a solid representative now in congress stewarding the values of the millennial generation. To the right, she has evidently gained legitimacy as a conservative boogeyman, which is somewhat surprising since I wouldn’t expect conservative politicians and pundits to take her so seriously so early on. It’s possible that the Hillary horse has finally taken its last beating, or maybe the political right is trying to nip the progressive agenda in the bud.

Whatever vacuum of conservative ire AOC has filled, she has certainly responded in Millennial fashion by responding directly, and with incisive vigor:

She is utilizing social media the way Trump does, providing what I think is a valuable counter-weight to the public debate. I am following her role in the party because I think she has the potential to disrupt the political agenda on both the left and the right. Will she become a Bernie Sanders figure, a Cory Book Figure, an Elizabeth Warren figure, or something else entirely? Only time will tell.